My first larger project was to modify a program by Craig F. Fastenow, K0CF, who wrote a Delphi program to display a clock on the screen (UTC). I added the possibility to change the timezone by selecting a certain prefix out of a list. After the selection the clock displays the local time at the location of the selected prefix (see below). 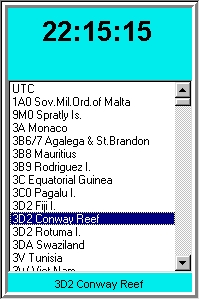 The selected timezone and the position of the clock, as well as the colors are saved in an ini-file. Colors of background and text may be set to any color.

I just finished writing a new version of Ham Clock. This version has only one new feature. You may also display the distance and heading from your location to  the selected prefix next to the time. The distance can be displayed in kilometers or in miles.

This program is also freeware and can be downloaded here (598 kByte). You have to run this setup file.
When starting the Ham Clock program you have to enter your own WW locator to use the heading/distance feature. You have to do this only once. There is a locator set in the ini file (JN47OV which is my locator) but you have to change this, unlesss you are living in my direct neighbourhood, hi.